Our Fall 2012 Northwest Tour with Worm Ouroboros will begin on November 9th, starting in Canada, then continuing through Seattle, Portland, Arcata, San Francisco, and Oakland. Below, you will find all of the flyers, as well as links to the Facebook event pages, which contain each show's details. Add our Facebook page to one of your Interest Lists see our updates from the road. 
This Fall, we will be playing shows in Chattanooga, Nashville, Seattle, Portland, Arcata, San Francisco, Oakland, and our first-ever Canadian show in Vancouver, BC. It will be our first time playing most of these cities, and we will be sharing the stage with many great bands. Scroll down for more information.

It's only fitting that we will be playing a pair of October shows in Tennessee with fellow Profound Lore Records artists, Bell Witch.

In November, we will have the honor of touring the Northwestern U.S. with our friends and label-mates in Worm Ouroboros, as well as a host of other great bands in each city. Watch for exclusive tour merchandise and live collaborations. We will also be playing our first-ever Canadian show. Dates, details, and Facebook event pages (if available) are listed below. We will continue to update this post as more information comes in.

Visit our "Live dates" page to see individual flyers, as we receive them. An event page for the whole tour can be seen here.

This website has been quiet, but we have been busy following our string of spring shows, so we'll take a moment here to address a few topics:

Writing for our second full album is officially underway, and the bulk of our time as a band will be dedicated to this pursuit for the next several months. Judging from what has already come out of these sessions, the sounds we'd only begun to explore while writing "Despond" will now be allowed to flourish and expand.

As announced recently, we are also working on a new song for an upcoming split release with Finland's Hooded Menace, to be released by Doomentia Records. A second new track is being prepared for another upcoming split release, to be announced soon. Both of these releases will see the light of day before the next album. Details coming soon...

Although we will be spending most of our energy on writing for the rest of this year, we are currently planning a West Coast mini-tour of the U.S.A. in mid-November. We'll share the details and band line-up for those shows as soon as we have everything confirmed. Another show in Nashville is likely this Fall as well.

We have also been confirmed to play next year's Maryland DeathFest XI in Baltimore (May 23rd - 26th, 2013), along with Carcass, Venom, Morgion, Pagan Altar, and many more. We're very much looking forward to that one.

Our own online store is being restocked at the moment, but Parasitic Records and Contagion Releasing still both have copies of the "Despond" 2LP vinyl edition for purchase. The CD version can still be purchased directly from Profound Lore Records. Digital purchases can be made on our Bandcamp site, where the full album can be streamed as well.

New and re-printed t-shirts are coming soon, along with oft-requested new hoodies and long-sleeves for the approaching autumn and winter months.

Two live songs recorded at our March 31st show in Pomona, CA have been released via Scion A/V & Profound Lore Records, as part of a promotional sampler, which can be streamed and downloaded here. The sampler also features live tracks from our friends in Pallbearer, Wolvhammer, The Atlas Moth, and Yob.

While in California for the Scion showcase, each band on the bill sat down for a full video interview. The full slate of interviews has now been released on YouTube. You can see our segment here, or just hit play below:


We are also in the process of updating the rest of this site's content, including new photos, reviews, live show listings, and the history/discography section.

The wait is over. "Despond" has just been released on vinyl via Contagion Releasing & Parasitic Records in a noble 2xLP gate-fold with 12" booklet featuring the full sized artwork from the incredibly talented Richard Friend. "Despond" has been remixed and remastered specifically for this vinyl release.

We are very proud of this endeavor and special thanks are in order: Tim Call (Parasitic), Dan Fried (Contagion), Chris Bruni (Profound Lore), Zack Allen (audio engineer extraordinaire), Richard Friend (Gloom art guru), Justin Stubbs (layout/design wizard) and all of our friends and supporters for their patience. The "Despond" vinyl edition can be purchased from us via our webstore or from Parasitic / Contagion: 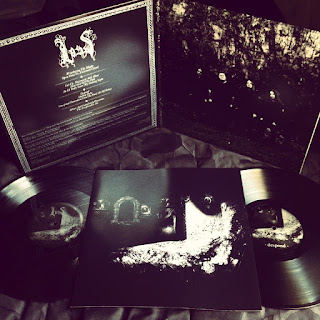 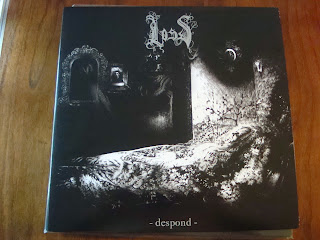 Our apologies: We are unable to play Chaos in Tejas

It is with great dismay that we announce that we will not be able to perform at Chaos in Tejas next weekend. Two of our members have employment obligations that simply cannot be ignored or escaped. It is literally a choice between playing the show and keeping our jobs. We are sorry as we know this is (very) last minute, but it was dropped on us within the last two days.... apologies... ~ Loss
Posted by Loss at 12:29 PM No comments:

We will be playing our first New York show this Saturday night, along with our good friends in Pallbearer and Sewer Goddess, at Saint Vitus Bar in Brooklyn. 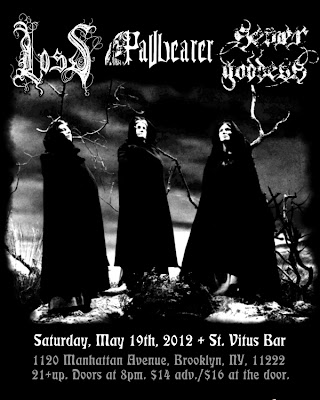 Wisconsin this weekend for the Gilead Fest

We will play our first-ever Wisconsin show this weekend at The Gilead Media Music Festival, to be held at the Electric Lounge & Lanes in Oshkosh. We will be headlining on Saturday night, April 28th, so expect a full set from us this time. We will also unveil a brand new t-shirt design, available for the first time at this show.

FAQ: For those who don't already have tickets, the show is long sold out. Some people may be selling a few passes on the Facebook event page, though.

The official website of Profound Lore Recording artists, Loss, based in Nashville, TN.